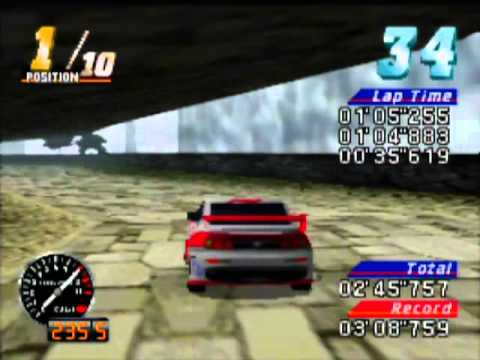 MRC is an average-at-best racing game developed by Genki (which contains some former Sega staff) and published by Imagineer/Ocean. If you’re somewhat familiar with what Genki mainly does these days, then it should come as little surprise that the game feels like a combination of Sega Rally and Ridge Racer with a tiny dash of the Shutokou Battle series (in the form of limited car customization). The game combines average audio, decent visuals, and average gameplay for a rather average experience.

After the game’s cool opening, you get access to your standard racing modes and can choose from a variety of cars that don’t handle very different from each other regardless of how you tune them (most reviews cite the controls as “bad” or “poor”, but it kinda depends). The game has a few courses that are designed pretty well, but if you were hoping the visuals were as crisp (and excellent) as the intro, think again; the graphics get significantly foggy when a race starts and the main reason this game is annoying isn’t entirely due to the controls, but the draw distance, which is a shame as the stages have some interesting layouts and the weather effects are a great touch. Even with the announcer warning you of what’s ahead, it’s almost impossible to actually see what’s ahead on some corners (so you basically have to memorize the courses and curves). It doesn’t help that the cars handle like Rally cars but the stages have uber sharp turns and such that you’d find in some Ridge Racer tracks, and the on/off road aspect adds admittedly little to the game.

If this game had a better camera, greater flexibility with the controls, and the visuals didn’t get diminished during races, this would be a great racer. As-is, it’s a title I’d pop in once or twice and then forget about it.